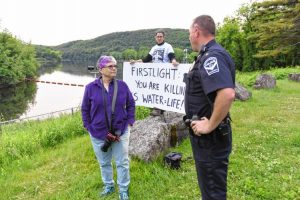 “Connecticut River Defenders is a nascent and informal group (“formalized” in 2022) of seasoned social justice activists from Franklin, Hampshire, and Hamden Counties. We came together as individuals over the past two years to bring attention to the urgent problems First Light’s Northfield Pumped Storage Station has been foisting on the Connecticut River and its ecosystem for over 50 years, and to demand that our public servants charged with wildlife, water, recreation, and environmental protection remove themselves from their entanglements with First Light and their support of the 50-year relicensing of the facility.  Why it matters: First Light’s Northfield Mountain Pumped Storage Station is a fossil fuel operation in spite of touting itself as hydro powered. It burns natural gas to suction the water up the mountain for later release for electric generation at peak prices and forcing the Connecticut River to run backward for five miles or more. This requires one-third more energy (gas) than is generated, however, holding the water until peak need which allows the company to profit from its release. In addition, 20 miles of the river are impacted by the river suction, killing hundreds of millions of young fish, eggs and larvae in the river- sucking turbines.

Our current tactics include demanding in-person meetings with responsible agencies to present our goals and demands.  Our secondary plan, if they refuse to meet, or downplay the real concerns, is to escalate our non-violent direct actions at their offices or other public places.  We also attend regulatory hearings and public meetings to ask questions and make statements holding First Light and regulatory bodies accountable. We plan to table at many of the fall, spring and summer festivals to educate the public about the Pumped Storage Station as well as develop our social media presence. What do we want?
1. Shut it down, NO relicensing

3.Land back: a more just, healing and productive use of Northfield Mountain would be to return the land to the original Indigenous people, the Western Abenaki and Nipmuc.” Cate Woolner