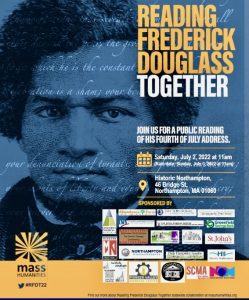 A Public Reading of Frederick Douglass’s Fourth of July Address
Sunday, July 3, 2022 at 11 am
On the Grounds of Historic Northampton“Reading Frederick Douglass Together brings people together to read aloud Frederick Douglass’s speech, What to the Slave is the Fourth of July?The event will take place on Saturday, July 2, 2022 at 11 am outdoors on the grounds of Historic Northampton.  Copies of Douglass’ speech will be distributed to all in attendance. The public can take turns reading passages from it in succession.  People may simply attend or attend and read. The event is free and open to the public.

The speech was first delivered in 1852, in Corinthian Hall, Rochester, New York to the Ladies’ Anti-Slavery Society. The themes addressed in the speech still resonant with Americans more than 150 years after they were written.  Now more than ever, the speech forces us to reckon with the legacy of slavery and the promises of democracy.
​
Frederick Douglass had strong ties to the Northampton Association of Education and Industry in Florence and spoke in downtown Northampton in the 1840s about slavery and the abolitionist movement.
Reading Frederick Douglass Together is a statewide initiative coordinated by Mass Humanities.
Now in its 13th year, the program will take place in communities across Massachusetts.”